Firing Up the Distant Past, With a Handmade Kiln

Posted on January 04, 2022 by Charlotte Albright

Anne Johnakin ’23 made a stone and clay oven to test fuels used in ancient ceramics. 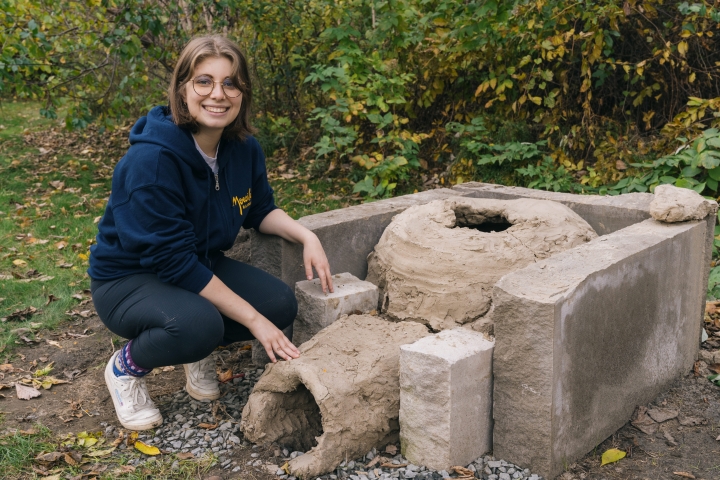 Just around the corner from the Ledyard Bridge in Norwich, behind the new Dartmouth Archaeology Station at Lewiston (DASL), stands a primitive, handmade oven—the kind that a Greek ceramist might have used more than 3,000 years ago. A rectangular limestone foundation supports a beehive-shaped clay dome.

The kiln is the centerpiece of an ongoing research project by Anne Johnakin ’23. A presidential scholar with a major in anthropology modified by classical archeology, Johnakin has been working with Professor of Anthropology Jesse Casana and Assistant Professor of Classical Studies Julie Hruby to design and build the structure using materials and processes common during the Bronze Age—and to use it to make pottery typical of the era.

I feel like I’ve got a better appreciation for how much work was involved in building and using these kilns.

Johnakin is not just researching those technologies; she’s trying to replicate them. But finding authentic materials hasn’t been easy.

Image
An amphora, or Greek-style jar, that Johnakin crafted, in the process of being fired in her experimental kiln. (Courtesy of Anne Johnakin ’23)

“This stuff was really hard to source because limestone is everywhere in Greece, but pretty rare in New Hampshire,” says Johnakin. “I had to get the industrial fire clay from Canada.”

It was tedious work, putting the kiln together piece by piece.

“I had a dozen 50-pound bags of clay delivered to the front of the lab and I had to wheelbarrow the loads to the back of the property,” says Johnakin.

So far, in three firings, Johnakin has experimented with three kinds of fuel: hardwood, softwood, and animal dung.

“That’s where I keep the horse poop,” she says, gesturing to buckets near the kiln.

Manure is easily found in the Upper Valley, but posed the biggest challenge as a fuel in the kiln.

“The hardwood and softwood worked well, but the dung was really difficult to burn,” says Johnakin. “The dung firing basically ended up being another hardwood firing, with some dung added throughout. It was a useful tool for controlling and dampening the fire when needed, but didn’t prove to add much actual fuel. If I fire it again, I would be interested in making bricks of dried dung.”

Working hard with her hands has deepened Johnakin’s understanding of what it took to make sturdy, beautiful pottery in early Greece. “It can be challenging for archaeologists to conceptualize labor, because most of them belong to academia,” she says. “But I sprained my wrist mixing the clay, and that’s something that you wouldn’t have been able to know about if you hadn’t experienced it. I feel like I have a better appreciation for how much work was involved in building and using these kilns.”

Johnakin, who is new to ceramics, says she’s become more skilled with practice.

“I got a lot better at starting and controlling the fire as it went on,” she says. “I got some fully intact pieces of pottery by the end.” She is now writing up her results.

Casana says Johnakin’s kiln puts on full display the benefits of hands-on learning made possible by the DASL lab.

“Anne has had to work through the many technical and logistical challenges: gathering supplies, building the kiln, locating and storing the different types of fuel sources, and of course actually firing the pottery,” he says. “She—and the rest of us—are learning a lot about how the entire process of pottery production might have worked in antiquity, and this helps us ask new questions about people in the distant past.”