Seventeen Dartmouth students and alumni have been awarded National Science Foundation (NSF) Graduate Research Fellowships (GRF) for 2016, and another nine received honorable mentions. The Dartmouth winners were among the 2,000 selected from 17,000 applicants nationwide. 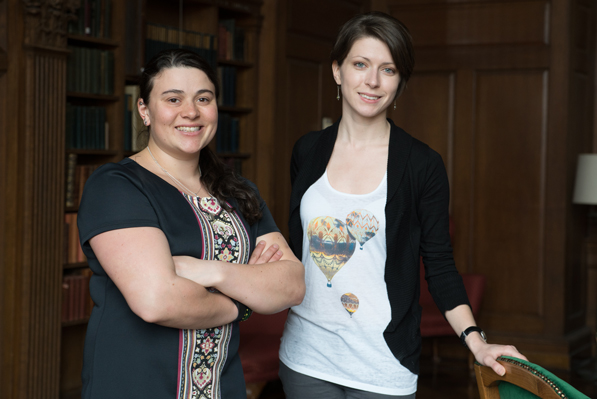 Aylin Woodward ’15, left, and Nina Maksimova ’15 were on campus when they received the news from the National Science Foundation (Photo by Eli Burakian ’00)

“Congratulations to the students awarded 2016 fellowships by the NSF’s flagship program, and to those receiving honorable mention,” says Elizabeth Smith, the Paul M. Dauten Jr. Professor and associate dean for the sciences. “It is a testament to their efforts and accomplishments at Dartmouth, successes that set the stage for their future research pursuits. We are proud of their achievements and appreciative of the accolades they bring to Dartmouth and to its faculty.

The GRF provides three years of financial support within a five-year fellowship period ($34,000 annual stipend and $12,000 cost-of-education allowance to the graduate institution). The support is for graduate study that leads to a research-based master’s or doctoral degree in science or engineering.

Two of the Dartmouth GRF winners were on campus on March 29, the day the winners were announced, when they received notice of their awards.

Aylin Woodward ’15, from Pittsford, N.Y., graduated with a bachelor’s degree in government and biological anthropology, and is now working as the communications and special projects fellow in the Office of the President.

“It is truly an honor to receive the NSF fellowship, and certainly more of a testament to the incredible support and guidance I was given as an undergraduate than anything else,” says Woodward.

She credits Professor Nathaniel Dominy as her inspiration to study biological anthropology. “He taught my first class as a freshman and my last class as a senior, and I wouldn’t have had it any other way,” she says.

Woodward hopes to pursue a PhD in human evolutionary biology and continue her work on hominin feet, studying the evolution of bipedalism and the functional morphology of the lower limb. She also plans to maintain a significant focus on science communication.

Nina Maksimova ’15 was born in St. Petersburg, Russia, and grew up in California. At Dartmouth she studied physics and mathematics and became involved in research in theoretical cosmology early during her freshman year.

“Working with physics Professor Robert Caldwell, I have studied the cosmic microwave background, searching for insights into the earliest moments of the universe’s history,” Maksimova says. “I am spending my gap year working in the Department of Physics and Astronomy, continuing to do research with Professor Caldwell.”

In addition to her research activities, Maksimova has been heavily involved in the Dartmouth Physics Society, the Academic Skills Center, and the Women in Science Project.

“I am delighted and grateful to receive the NSF GRF and look forward to starting a PhD this fall in astronomy and astrophysics at Harvard University,” she says.