The 60th Anniversary of the Peace Corps

Mark Shriver, President, Save the Children Action Network, and Glenn Blumhorst, Pres. and CEO, Natl. Peace Corps Assn., discuss the past, present and future of the Peace Corps. 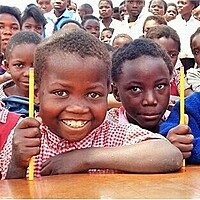 In President Kennedy’s first days in office, he asked Sargent Shriver to create the Peace Corps, which over the last 60 years has sent over 250,000 Americans to more than 140 countries to serve as global citizens. Mark Shriver and Glen Blumhorst look back at Kennedy’s campaign promise and forward to what lies ahead for the Peace Corps.

Speakers:
Mark K. Shriver’s career in advocacy and service organizations has focused on advancing the right of every child to a safe and vibrant childhood. As senior VP of U.S. Programs and Advocacy at Save the Children, and president of its political advocacy arm, Save the Children Action Network, Shriver’s focus today is on ensuring a strong start for children living in poverty in America and on increasing access to high quality early childhood education for children.

Prior to joining Save the Children in 2003, he was a member of the Maryland House of Delegates, where he served as the first Chair of the Joint Comm. on Children, Youth and Families. He also created the Choice Program, which serves delinquent and at-risk youth through community-based counseling. He is the author of A Good Man: Rediscovering My Father, Sargent Shriver and Pilgrimage: My Search for the Real Pope Francis. His latest book, 10 Hidden Heroes, will be released in March. Shriver lives with his wife and children in Maryland.

Glenn Blumhorst is Pres. and CEO of Natl. Peace Corps Assn. (NPCA), an enterprise at the center of a community of more than 180 chapters and 240,000 individuals who share the Peace Corps experience. Founded in 1979, NPCA’s mission is “to champion lifelong commitment to Peace Corps ideals.” During his tenure, Glenn has led NPCA’s historic transformation from a dues-based alumni association to a community-driven social impact organization.

Prior to joining NPCA, Glenn served for 18 years with ACDI/VOCA, most recently leading the establishment and expansion of the organization’s worldwide Community Stabilization and Development practice area as Managing Director. He also served as Country Rep. and Chief of Party on several major USAID-funded projects in Central & South America. His work has taken him to over 65 countries and enabled his Spanish language fluency.

Host:
Elizabeth J. Wilson is the inaugural director of the Arthur L. Irving Inst. for Energy and Society and Prof. in the Environmental Studies Dept. at Dartmouth. She studies how energy systems are changing in the face of new technologies and societal pressures. Her work focuses on the implementation of energy and environmental policies and laws in practice. Her books include Energy Law and Policy and Smart Grid (R)evolution: Electric Power Struggles .

Before joining Dartmouth in 2017, Wilson was a prof. at the Univ. of Minn. and was awarded a 2015 Andrew Carnegie Fellowship and spent the 2016-7 academic year at the Danish Tech. Univ. She was selected as a 2014-5 CIC Academic Leadership Fellow. She was chosen as a Leopold Leadership Fellow in 2011. She spent the 2009-2010 academic year as a visiting professor at Tsinghua Univ., in Beijing, supported by McKnight Land-Grant Professorship. Prior to joining the Univ. of Minn. she worked with the EPA and before that Wilson worked in Belgium, Burundi and Tanzania. She holds a doctorate in Engineering and Public Policy from Carnegie Mellon Univ.