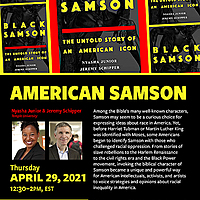 Abstract: Among the Bible’s many well-known characters, Samson may seem to be a curious choice for expressing ideas about race in America. Yet, before Harriet Tubman or Martin Luther King was identified with Moses, some Americans began to identify Samson with those who challenged racial oppression. From stories of slave rebellions to the Harlem Renaissance to the civil rights era and the Black Power movement, invoking the biblical character of Samson became a unique and powerful way for American intellectuals, activists, and artists to voice strategies and opinions about racial inequality in America.

As part of the on-going efforts to transition to an actively anti-racist department at Dartmouth College, the faculty of the Religion Department announce the establishment of a series of panel discussions and colloquia focusing on the intersection of race and religion. This initiative is being undertaken in response to the distressingly frequent incidence of racial violence not only in the United States but in many countries throughout the world.  Sadly, religions have played important roles in encouraging and legitimating racial and ethnic oppression. However, religion has also inspired extraordinary acts of resistance and critiques of racial injustice.  These series of events will explore the complexity and volatility of the relationship between race and religion, not only in the United States, but in other parts of the world.  Each forum will allow time for discussion and will be open to students, faculty, and staff of Dartmouth College.