VIRTUAL CONVERSATION: "School Photos: Why They Matter in Times of Crisis"

A discussion of the recent exhibition “School Photos and Their Afterlives" with guest curators Marianne Hirsch and Leo Spitzer and participation from artist Marcelo Brodsky. 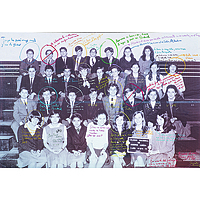 Schools have been closed since March. With the loss of rituals accompanying schooling, graduation, and the posing for group photos, graduates in caps and gowns have had to resort to taking selfies in their backyards.

In this online conversation, Marianne Hirsch and Leo Spitzer, guest curators, and Amelia Kahl, Associate Curator of Academic Programming at the Hood Museum, will discuss their recent exhibition School Photos and Their Afterlives, highlighting the ubiquity of class photos across the globe and their importance in moments of crisis.

Argentine artist Marcelo Brodsky, whose image The Class was featured in the exhibition, will join the conversation to describe his work with school photos in the pursuit of solidarity and social justice.