“Encounters between modernity and tradition: The hybridization of the culture of maize” 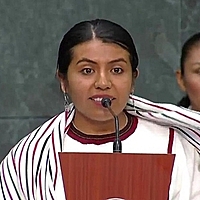 “Encounters between modernity and tradition: The hybridization of the culture of maize”

Despite the modernising productivity paradigm promoted in agricultural research and development (AR&D), food systems relying on traditional technologies, such as native seeds, are still widespread. This research aims to understand how and why, farmers from an indigenous community in Mexico continue to cultivate native maize, although they have adopted other aspects of ‘modernization’. We find that the interactions of migration, climate shocks and Mexican agricultural and rural development policies have shaped farmers’ culture of maize technology, resulting in a hybrid system that neither follows the narrative of the modernisation productivity paradigm nor that of traditional food systems Native maize is therefore a technology that is embedded in broader practices, meanings and discourses. We show that native maize traditional element in the farmers’ world that co-exists and is blended with others from the so-called modern world in order to maintain continuity in their livelihoods in a changing world and to maintain self-determination. For example, farmers have introduced irrigation into their rainfed milpas, adjusted their sacred belief that “maize should be fed by rainfall”. When migration affected the social fabric and therefore several agricultural practices, such as seed and labour exchanges, the farmers adapted by starting a gene-bank, a farming school and other spaces to reinforce both their social fabric and agriculture. Farmers’ livelihoods are grounded in the principle of “comunalidad”: with farmers linked to their ‘territory’: the space where they enact their right to self-determination (“usos y costumbres”) and reinvent their social fabric and community based work (“tequio”) to find continuity to life (“fiesta”). This reinvention includes aspirations, identity, culture and maize cultivation and is an adaptation to a changing world. As scholars, policy makers, and social activists in AR&D we usually adopt a pro-modernity or pro-tradition position and interpret and portray the livelihoods of farmers through these opposed and dichotomic worlds. However, farmers choose to take what suits them best from the pluriverse to creating a hybrid life and fit a changing world.